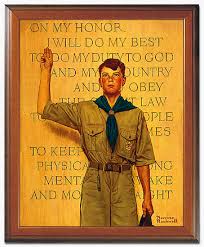 A couple of our scouts last year went to their Eagle Board of Review and were asked if they could recite the Outdoor Code.   They couldn’t.  At first I was kind of perplexed on why it was even brought up, but when I reread the Scout Handbook, I found that every Scout, upon joining agrees to not only understand the oath, but agrees to live by it.   It didn’t negatively affect them during their Board, but I challenged the youth leadership to prepare the troop for answering that question and to challenge the troop to understand the oath.  Funny thing, our District Advancement Chair at a later date, after a few more Eagle Boards, confided in me that ours are some of the few scouts that actually know the code

I kind of like the idea of Oaths and Codes.  I hope that memorizing them and the repetition is meaningful to the scout and during a Scoutmaster’s conference, I quiz them on the meaning of the words that they use in the pledges that they make.

Our troop is going through a shooting theme right now.  As I was reviewing the Merit Badge pamphlet’s I learned there was a Scout Marksman’s code.  I’ll bring it to PLC and challenge them to teach the troop this one as well, but as an interesting exercise over the last few days I’ve been compiling other Oath’s and Codes and Creeds that are being used or have been used by Scouts.  Our Troop uses some but many are new to me:

It is the duty of each member of this Patrol leader’s council:

I will develop spirit in my Patrol

I will advance along the Scout ladder

I will do a Good Turn daily

I will live the Scout Oath and Law

I will lead my Patrol

I will plan my work

I will be generous and give credit where it is due

As the leader of my patrol, I will do my best to:

As a leader in my troop I will do my best to:

“I promise to do my best to be worthy of my office as Patrol Leader, for the sake of my fellow Scouts, my Patrol and my Troop.”

I will think of my Patrols in terms of the leaders

I will adopt the answer “Ask your Patrol Leader; he knows!”.

I will take my own advice and “Ask the Patrol Leader; he knows!”

I will refrain from criticizing them before their group

I will count on my Patrol Leaders to lead

I will always be ready to give a helping hand, a word of advice, or a boost in confidence to my Patrol Leaders

I believe in the United States of America as a Government of the people by the people, for the people, whose just powers are derived from the consent of the governed; a democracy in a Republic; a sovereign Nation of many sovereign States; a perfect Union, one and inseparable; established upon those principles of freedom, equality, justice, and humanity for which American patriots sacrificed their lives and fortunes.

I therefore believe it is my duty to my Country to love it; to support its Constitution; to obey its laws; to respect its flag, and to defend it against all enemies.”